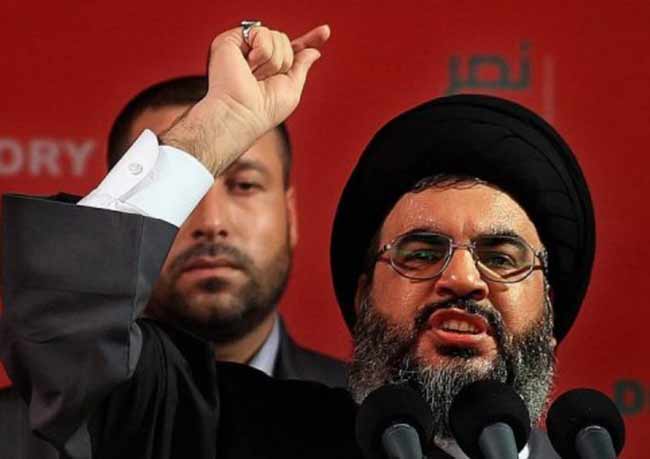 If there were any doubt as to just how toxic sectarian politics has become in the Middle East, the latest statement from the leader of the Iran-backed Lebanese Shia militant group Hezbollah should clear things right up.

Hassan Nasrallah, the secretary general of a group that has been fighting Israel for decades, declared on Tuesday that “Wahhabism is more evil than Israel,” Lebanon’s Al Akhbar newspaper reported.

Wahhabism is the ultra-fundamentalist strain of Sunni Islam that Saudi Arabia’s government promotes and that strongly influences the ideology of Sunni jihadist groups like al-Qaeda and ISIS.

In other words, things have gotten so bad that Hezbollah, Israel’s mortal enemy, now considers Wahhabis — that is, fellow Muslims — to be worse than Israel. Bear in mind, this is coming from the same man who has described Israel as “a cancerous entity and the root of all the crises and wars” and pledged that Israel’s destiny “is manifested in our motto: ‘Death to Israel.’”

It’s also coming from a man at the helm of a group that has engaged in numerous conflicts with Israel, including a horrifically bloody all-out war in 2006 that resulted in the deaths of around 1,300 Lebanese, mostly civilians, and 165 Israelis, 121 of whom were soldiers. Israeli security officials say the group now has the capacity to batter their country with more than 1,000 rockets a day.

But despite how it may seem, Nasrallah’s statement is not, at its base, a conflict about religion. Though there are certainly strong religious disagreements between Sunni and Shia — and especially between extreme fundamentalist Sunnis and extreme fundamentalist Shia — the conflict between Iran and Saudi Arabia has little to do with dogma. It’s actually about something far less exotic: power and influence.

Tehran’s Shia government and Riyadh’s Sunni one have spent years waging a Cold War–style proxy fight for dominance of the Middle East and the broader Muslim world. The two countries haven’t openly fought each other, but they back extremist groups around the Middle East who share their worldviews — and who are willing to fight, kill, and die on their behalf.

This proxy war plays out in conflicts all over the Middle East. For instance, Saudi Arabia, with US military assistance, is engaged in a brutal air war against Iranian-backed Houthi fighters inside Yemen that has sparked a massive humanitarian crisis in the impoverished country. The United Nations recently estimated that at least 10,000 civilians have died, and acknowledged that that number was almost certainly lower than the actual toll.

Saudi Arabia’s proxy fight with Iran is also helping to fuel the bloodshed in Syria, where an estimated 400,000 people have been killed over the past five years while millions more have fled the country and sparked the biggest refugee crisis in decades.

Hezbollah — the strongest and most influential of Iran’s various surrogate groups — has sentbetween 5,000 and 8,000 fighters to Syria on behalf of the Syrian regime of Bashar al-Assad. Fighting against them are myriad secular and Islamist groups, including some more extreme Wahhabi-influenced groups that are being supported by Saudi Arabia.

Saudi Arabia wants its preferred groups to topple Assad in order to remove the pro-Iranian leader and install a more Saudi-friendly (preferably Sunni) regime. Iran, naturally, would very much like to prevent that from happening.

The (potentially even deadlier) war of words

In the past few weeks, the hottest front in the showdown between Saudi Arabia and Iran has taken place online, in the press, and on social media. The New York Times published a scathing op-ed by Iranian Foreign Minister Mohammad Javad Zarif in which Tehran’s top diplomat argued that “the key driver of violence” in the Middle East has been Wahhabism, the “extremist ideology promoted by Saudi Arabia.”

Saudi Arabia responded by publishing a series of tweets from its US embassy’s official Twitter account accusing Iran of having “supported violent extremist groups all over the world” and stating that “Iran or its proxies have been blamed for terrorist attacks around the world.”

The new statement from Hezbollah’s secretary general may be the latest attack in this ongoing tit-for-tat war of words playing out across the internet, but it won’t be the last. The proxy war between the two countries, sadly, also shows no signs of coming to a peaceful end anytime soon.