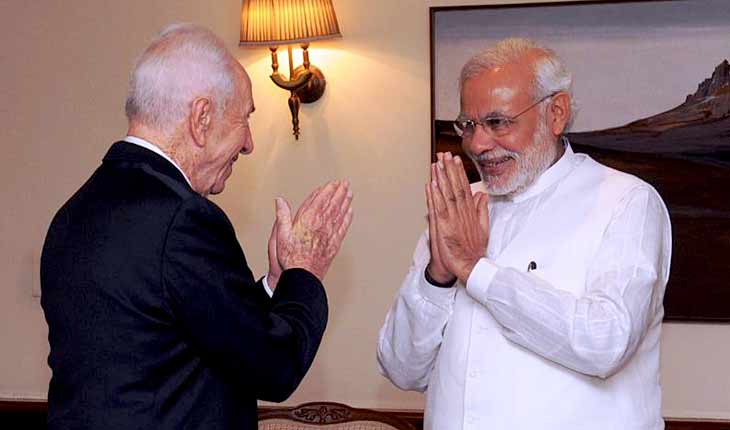 Peres, who planted seeds of bilateral ties and sprang a shock, is dead

On his last visit to India just under six months after Narendra Modi became Prime Minister, Shimon Peres wanted to meet India’s new leader. When Peres mentioned his wish to Daniel Carmon, Israel’s ambassador in New Delhi who had assumed his post only a few months earlier, Carmon immediately put in a request with the Prime Minister’s Office (PMO).

Peres, who occupied the most coveted political jobs in Israel and was both President and Prime Minister of his country in a life that spanned 93 years, died in Tel Aviv on Wednesday from a stroke he suffered two weeks ago.

The seeds of India’s now-thriving relations with Israel were planted by Peres as Prime Minister when he quietly met then Prime Minister Rajiv Gandhi who was in New York in the autumn of 1985 for the UN General Assembly. It took another seven years for that meeting to blossom into full diplomatic relations between New Delhi and Tel Aviv.

Although David Levy was Israel’s foreign minister when Rajiv’s eventual successor P.V. Narasimha Rao formally announced relations with Israel in January 1992, Peres had become foreign minister by the time India set up its first embassy in Tel Aviv in the summer of that year.

When then foreign secretary J.N. Dixit visited Israel in March 1993, he carried an invitation for Peres to visit India. The Israeli foreign minister instantly accepted the invitation. He arrived in New Delhi in May that year.

Of all the official visits by foreign leaders that I have reported on from anywhere in the world, the three-day visit by Peres to New Delhi was among the most memorable. Lessons from that visit are relevant today for India more than ever.

At a news conference towards the end of that visit, tossing political correctness right out of the window, Peres argued for changing the demographic composition of the Kashmir Valley. It was the huge majority of Muslims in the Valley that was irritating those outside who wanted to prise Kashmir away from India, he reasoned.

The idea of a Muslim majority state at peace within Hindu-majority India was anathema to those who could not come to terms with India’s pluralism, multi-ethnic and multi-religious identity. New Delhi, said Peres, should not hesitate to populate the Valley with people from other parts of the country.

In effect, Peres was arguing for the dilution of Article 370 of the Constitution, if not its abrogation. Reporters listened in utter shock.

A furore ensued, with secularists and others who had opposed the establishment of relations with Israel, baying for Rao’s blood.

It may never be known, but there is speculation within the Modi government that it was the 2014 meeting between Peres and the Prime Minister that prompted Modi to take his foreign policy to state capitals.

Dixit records in his memoirs that “Peres informed me that he had asked his Ambassador in New Delhi to invite leaders of various political parties and the Chief Ministers of various sates to visit Israel in order to get a first-hand idea of those areas in which cooperation between the two countries could be built up.”

Gujarat was one of the first states to send its chief minister to Israel. Maharashtra followed. Israel’s diplomatic and economic foray into Indian state capitals was one of the talking points for Modi’s meeting with Peres, who narrated his experiences in this context in the 1990s.

Shortly after his meeting with the tallest Israeli leader of our time, Modi instructed the external affairs ministry to set up a “states” division and post diplomats in states to streamline their external relations.

Peres will be remembered as a lifelong fighter for peace even when his belief in peaceful co-existence with Israeli Arabs and Palestinians cost him elections and political office. He was awarded the Nobel Peace Prize in 1994.

After the Oslo peace accords of 1993, in which Peres played a big part as foreign minister, he lobbied to get India into the working groups set up to make relations with the Palestine Liberation Organisation workable.

India’s contribution to the working group on water resources management was especially commendable. Without relations with Israel, New Delhi could not have played its part in this normalisation process.

The last high-level Indian leader whom Peres met was President Pranab Mukherjee exactly a year ago. In a condolence statement, the President today “warmly recall(ed) my last meeting with him (Peres) in October 2015, during my visit to Israel”.

Mukherjee said: “We, in India, remember Mr. Peres as a steadfast friend of our country, whose lasting contribution to the strengthening of the close bilateral partnership between India and Israel will be long remembered.”