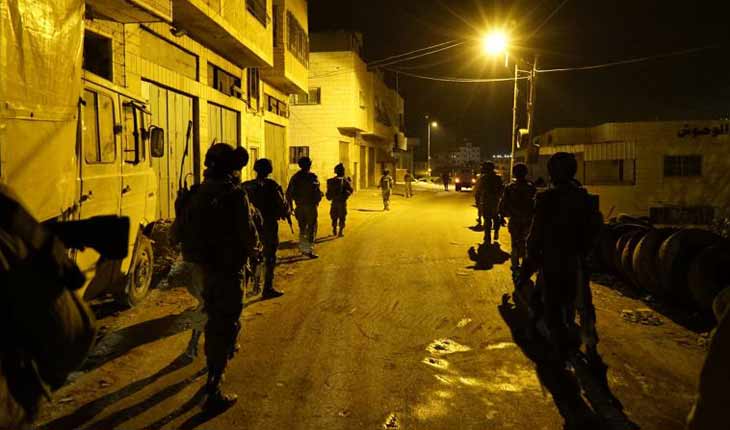 It was well past midnight late in August as a convoy of Israeli armored vehicles raced through the winding streets of Bethlehem in the occupied West Bank. Arriving at a city center mansion, soldiers broke the front gate and detained a middle-aged Palestinian couple in night clothes. In the basement, they seized weapon-making machinery, arms and ammunition.

Roman Goffman, the Israeli commander who oversaw the operation, called it one of the more serious recent weapons finds. But in many ways it was a typical night in the West Bank, and helps explain why a year after Palestinian youths began a campaign of stabbing Israelis, widespread predictions that the latest wave of violence would evolve into a third Palestinian uprising have not materialized.

“It’s almost impossible to build a serious armed network in the West Bank under the current circumstances,” said Alon Eviatar, a former senior military officer in the West Bank. “Israel’s security services are much more efficient now than they were in previous uprisings and the mantra is not to refrain from going in for raids as much as needed to clear out cells.”

Wednesday’s death of Shimon Peres, an early supporter of Jewish settlements and then a tireless advocate of a Palestinian state, has renewed debate over Israel’s half-century rule of the 2.5 million West Bankers. Conventional wisdom contends that, with Jewishsettlements expanding and Palestinian life constricted, the occupation is unsustainable because the occupied will rise up as they did in 1987 and 2000. And while the fury created by foreign military occupation could well explode again — last week brought an upsurge in stabbings — the reality on the ground shows why the next rebellion will be much harder to carry out.

Israel’s grip on the territory, underpinned by granular surveillance methods that eavesdrop on phone calls and read text messages, is far more extensive than in previous decades. Based on high-tech monitoring methods, combined with human intelligence that includes a discreet but fertile cooperation with Palestinian security services, multiple raids occur nightly, according to a senior military official who spoke on condition of anonymity due to army protocol.

“A simple phone call from Nablus to Bethlehem has to be rerouted outside of the West Bank,” said Mashhour Abudaka, a former Palestinian minister of information technology and telecommunications. “There’s no question they can intercept almost any communication with very little effort.”

After years of being barred from doing so, more than 100,000 West Bankers now work in Israel, giving them a stake in calm. And with the West Bank and Gaza divided by a nearly 10-year split between the two major political parties, Fatah and Hamas, West Bankers are fairly insulated from the Gaza conflict. Even proponents of a two-state solution say Israel could hang on to the West Bank for a fairly long time.

“There is this myth that the status quo is unsustainable, that it must be solved now,” said Amos Yadlin, who headed Israeli military intelligence from 2006-2010 and favors a demilitarized Palestinian state. “But Israel can manage this situation as it is for many more years.”

Israel captured the West Bank from Jordan in the 1967 Middle East war and its military has ruled over the Palestinian population there ever since. It has built dozens of Israeli settlements, driven by security tactics (civilians require military protection) and the argument that the ancient Jewish homeland was there even more than along the Mediterranean coast of Tel Aviv.

The left argues that the situation amounts to collective punishment of Palestinians who live without full democratic rights, and turns Israelis into overlords, corroding their moral fiber. If Israel wants to be Jewish and democratic, it has to leave and grant the Palestinians their own state. The right says the Palestinians can’t be trusted to live in peace, that extremists among them will prevail, and the abuses of occupation can be managed.

For a QuickTake explainer on the two-state solution, click here.

After the knifings began last October, Israel stepped up its daily incursions, boosted social media monitoring, and closed down radio stations and charities it blames for incitement, many of them run by Hamas, according to a senior military official. It was key to deduce which social media postings were likely to translate into action, the official said.

Prime Minister Benjamin Netanyahu underlined the approach at a recent briefing with journalists in The Hague.

“We brought it down primarily by predicting the next attack,” Netanyahu said of the violence. “We are using all kinds of methods, including data mining, which help us identify potential threats.”

As a result, lethal attacks have come largely from so-called lone wolves with little warning. More than 30 Israelis — and more than 200 Palestinians — have been killed in attacks related to such efforts. The army says it has closed more than 30 weapons factories since January.

The Palestinian Authority is working with the Israelis, sometimes actively, sometimes by looking the other way. It carries out its own arrests and weapons seizures and complains about the Israeli raids. Popular backing for violence waxes and wanes and is not high now. There is also a growing Palestinian movement for international boycott of Israel.

The Palestinian governor of Hebron, Kamel Humeid, spent much of his youth in Israeli prisons and when the latest violence broke out, he exhorted village leaders to stop their youth from taking part.

“They were playing right into the Israeli hands,” he said of the stabbings. “The Israelis want a reason to come and build more checkpoints, more settlements, and keep their occupation in place.”

The wave started last year with demonstrations, riots, car-rammings and stabbings as a response to what Palestinians perceived as Israeli provocations at a holy Jerusalem shrine. Palestinian President Mahmoud Abbas and the rest of the leadership angrily condemned the Israeli moves but were surprised by the violence. While they allowed riots near Israeli checkpoints, about a month later Abbas instructed his forces to stop the youths from clashing with Israelis and urged officials to calm tensions, according to a senior Western official.

“The Palestinian security service prevented people from getting to places where there is contact with the Israelis,” said Nabil Shaath, a senior aide to Abbas. “They arrested people suspected of having weapons.”

Things would change if militias loyal to Abbas, with tens of thousands of weapons, turned on Israel. Ilan Paz, a former head of the army’s civil administration and West Bank brigade commander, believes that without a political solution, they eventually will revolt.

But the Palestinian Authority appears more worried by the looming political threat of Hamas, the Islamist party that rules Gaza, than by Israel right now. It suspended municipal elections scheduled for Oct. 8 as some predicted a Hamas victory.

Israel allows Palestinian workers to cross into Israel daily even as it targets specific clans, sometimes revoking permits belonging to extended families connected to an assailant.

“During the second intifadah, we didn’t take such a focused approach,” Paz said, using the Arabic term for uprising. “The army today understands that even if most Palestinians support the uprising, if they’re not active, we have to continue to give them reasons to stay out of the terror cycle. We have to give them the opportunity to work, to move around, to work in Palestinian areas, to go from city to city.”


4 hours, choppers and 38 kills: How India avenged the Uri attack Separation is not the Answer