The Muslims of Cuba 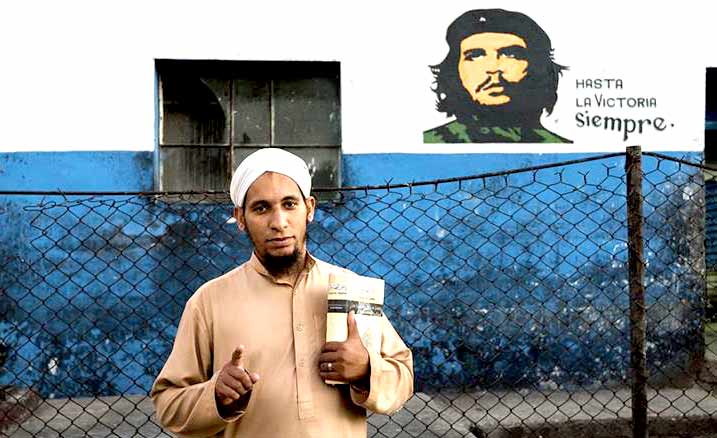 Source: AlJazeera
How a new crop of neighbourhood entrepreneurs are helping spread awareness about a fledgling religious community.

Santa Clara, Cuba – “Documents printed” reads a handwritten sign hanging outside the first floor of a house on the outskirts of Santa Clara, a university town in central Cuba.

Hassan Jan, 43, runs his makeshift printing shop from the front room of his home – part of a once-airy villa, now divided into four small dwellings, and surrounded by Soviet-style apartment blocks.

In the front room, which is separated from the rest of his house by a curtain, is a sofa, two chairs, a fish tank with goldfish and Hassan’s slow, noisy printer. Louvred windows do little to keep out the heat.

This kind of home-run micro-business has become common since Cuba relaxed its laws on self-employment in 2008.

A front room in a home will often double up as a telephone repair centre, barber shop or hair salon, whatever the neighbourhood needs. Hassan charges 1 Cuban peso ($.04) per sheet and rarely earns more than $1 a day. It’s just enough for him to support his wife Shabana and their two children.

Hassan, who has a dark beard and clear blue eyes, wears a dishdasha, the long white garment worn in many Muslim countries and a white head-covering. Beside an ornate 19th century clock on the wall above the computer hangs a photograph of Masjid al-Haram, the Sacred Mosque of Mecca.

Hassan and Shabana belong to a small but growing number of Cubans who have converted to Islam, or, as they put it, “accepted Islam”.

There are believed to be only a few thousand Muslims in Cuba, an officially secular, but largely Catholic country. The majority are foreign students or workers. Hajji Isa, formerly Jorge Elias Gil Viant, a Cuban convert and artist, and former librarian with the Arab-Cuba Union, a cultural organisation based in Havana, estimates that there are about 1,000 Cuban Muslims, both converts and descendants of Muslim immigrants.

“It’s a young community,” he says. “Muslims from abroad have been and still are a determining factor in the creation and development of the Cuban communities … Muslim students from African, Western Saharan, Yemen, Palestine and other Arab countries were a big influence in the 1990s, then later many from Pakistan.”

This, according to Isa, has meant that the small Muslim communities across the island have different characteristics, shaped by those who originally influenced them and local circumstances. As the number of Muslim converts grows, however, people are becoming more aware of Islam as a religion that’s also practised by Cubans. Small businesses, such as Hassan’s, help to bring more Cubans into contact with Muslims and also support the growth of the community.

“This has been a new field for Muslims and has helped them economically and to be able to support Muslim brothers,” Isa says.