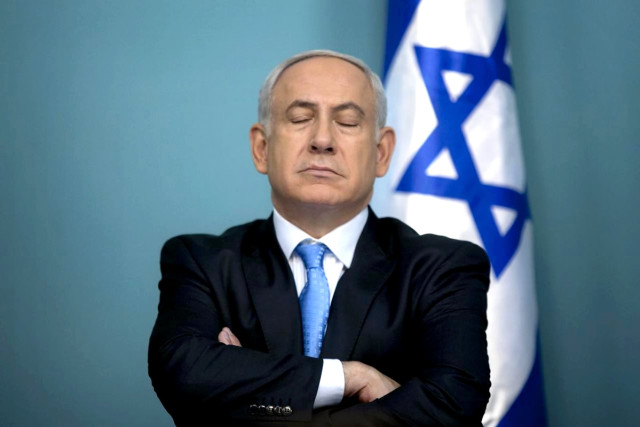 The Palestinians should not be too quick to dismiss the invitation extended by Israeli Prime Minister Benjamin Netanyahu to Palestinian President Mahmoud Abbas to address Israel’s parliament in return to “gladly come to speak peace with the Palestinian parliament in Ramallah.” Netanyahu’s gesture was quickly rejected by the Palestinians as a “new gimmick” but the invitation is reminiscent of the one issued by former Israeli Prime Minister Menachem Begin to former Egyptian President Anwar Sadat to visit Israel — and the rest is history. On Nov. 19, 1977, Sadat became the first Arab leader to visit Israel when he met with Begin and spoke before the Knesset in Jerusalem about his views on how to achieve a comprehensive peace to the Arab-Israeli conflict which included the full implementation of UN resolutions 242 and 338.

The visit led to the 1978 Camp David accords, the series of meetings between Egypt and Israel facilitated by then US President Jimmy Carter, then the signing of a peace treaty between Israel and Egypt in the US the following year. For good measure, both Sadat and Begin were awarded the Nobel Peace Prize for creating the treaty.

For all its shortcomings, Camp David demonstrated that negotiations with Israel were possible and that progress could be made through sustained efforts at communication and cooperation.
Despite the disappointing conclusion of the 1993 Oslo accords, it was a significant development that had little chance of occurring without the precedent set by Camp David.

Another unprecedented invitation involving the Palestinians and Israel needs mentioning, that of Bill Clinton becoming the first US president to visit Palestinian territory where he addressed the Palestine National Council. On that day in 1998, Palestinian leaders approved a measure affirming the right of Israel to exist. Rising from their seats and voting by raising their hands, the PNC voted nearly unanimously to remove clauses from the Palestine Liberation Organization charter that called for the destruction of Israel. The acceptance by the Palestinians that Israel had the right to live within secure borders led to the 2000 Camp David summit II which, while it ended without an agreement, could not have been held in the first place had it not been for Clinton’s visit.

Despite these two examples of how official visits can bend the arc of history, the Palestinians automatically rejected Netanyahu’s invite to Abbas which was designed to mask what they described as Israel’s intransigence on moving forward with the Mideast peace process. It is possible that the aim of the invitation was an attempt by Netanyahu to isolate UN attempts to restart and impose a peace process between Israel and the Palestinians. In reiterating his persistent call for direct negotiations with the Palestinians, Netanyahu has rejected any possible UN plan to unilaterally impose a solution to the conflict, reiterating Israel’s longstanding complaints that the UN is biased against Israel. His biggest concern is that President Obama might allow the UN Security Council to endorse Palestinian statehood at year end without the traditional US veto of such a measure.

The Palestinians have rebuffed Netanyahu’s past offers for such invitations, saying his hard-line position on all core issues made dialogue impossible. Indeed, Netanyahu rejects a settlement freeze, will not uproot settlements, rejects the 1967 borders as the basis for talks and rejects any division of Jerusalem.

But the Palestinians should note that at the time, Egypt and Israel were mortal enemies, having fought three wars. Camp David called for a five-year transitional period of Israeli withdrawal from the West Bank and Gaza. The transitional period would include the introduction of Palestinian self-government and an end to Israeli settlements in the West Bank. Much of the Arab world derided it as a weak deal. But in hindsight, if the provisions had been carried out, Israel and the Palestinians might not be in the impasse they are in at present.