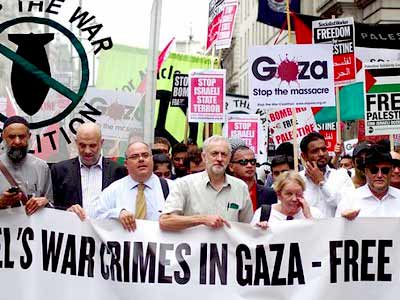 All other political parties scored far lower in the poll, which asked whether Jews believed they were guilty of leniency towards anti-Semites amongst MPs, members and supporters.

The Campaign Against Anti-Semitism (CAA) pointed to the research as further worrying evidence that “Britain’s Left is now descending into darkness”.

Joe Glasman, the organisation’s head of political investigations, said: “Urgent action is needed by the parties of the Left which have talked the talk, but now need to walk the walk.

“Jews are the canaries in the coal mine, and in large numbers are falling silent in Jeremy Corbyn’s Labour Party. The whole nation should listen to that silence and shudder.”

The campaign group is launching a manifesto today to step up the fight against anti-Semitism in political parties, calling on them to adopt the international definition and strict disciplinary procedures.

A total of 1,864 British Jewish adults were surveyed, of which 87% said they believed the Labour Party is too tolerant of anti-Semites in its ranks.

That compared with much lower, but still sizeable, figures for the Green Party (49 per cent), Ukip (43 per cent), the Liberal Democrats (37 per cent) and the Conservatives (13 per cent).

The CAA said it was striking that “the Labour Party and left-wing parties were once responsible for leading the fight against racism”, but “this polling shows that British Jews now consider them to be the most tolerant of anti-Semitism”.

Every party had strong policies against racism, but “the Jewish community does not believe that those policies are implemented firmly when it comes to anti-Semitism”.

This week, Mr Corbyn has sought to assure Jewish Labour supporters of his commitment to stamping out anti-Semitism within Labour.

He pledged to move ahead with implementing the recommendations of the Chakrabarti report, published in the summer.

In a statement, Mr Corbyn said: “Let me be clear – I stand against all forms of prejudice and discrimination and will not tolerate any forms of it in our party.

“Anyone who is found to have been involved in anti-Semitic abuse or instances will be dealt with through our party structures.”