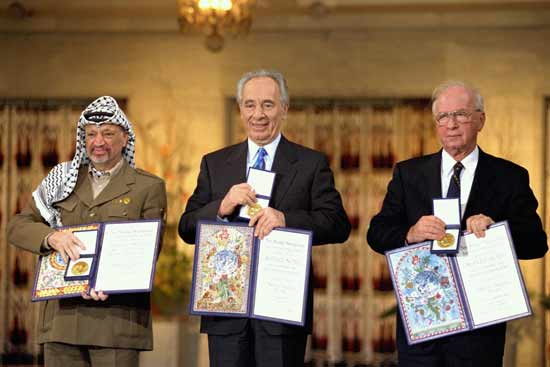 Prof. Efraim Karsh, the incoming director of the Begin-Sadat Center for Strategic Studies, indicts the Oslo diplomatic process as “the starkest strategic blunder in Israel’s history” and as “one of the worst calamities ever to have afflicted Israelis and Palestinians.”

“Twenty three years after its euphoric launch on the White House lawn,” Karsh writes in this comprehensive study, “the Oslo ‘peace process’ has substantially worsened the position of both parties and made the prospects for peace and reconciliation ever more remote.”

“The process has led to establishment of an ineradicable terror entity on Israel’s doorstep, deepened Israel’s internal cleavages, destabilized its political system, and weakened its international standing.”

“It has been a disaster for West Bank and Gaza Palestinians too. It has brought about subjugation to corrupt and repressive PLO and Hamas regimes. These regimes have reversed the hesitant advent of civil society in these territories, shattered their socioeconomic wellbeing, and made the prospects for peace and reconciliation with Israel ever more remote.”

“This abject failure is a direct result of the Palestinian leadership’s perception of the process as a pathway not to a two-state solution – meaning Israel alongside a Palestinian state in the West Bank and Gaza – but to the subversion of the State of Israel. They view Oslo not as a path to nation-building and state creation, but to the formation of a repressive terror entity that perpetuates conflict with Israel, while keeping its hapless constituents in constant and bewildered awe as Palestinian leaders line their pockets from the proceeds of this misery.”

On the strategic and military levels, it allowed the PLO to achieve in one fell swoop its strategic vision of transforming the West Bank and the Gaza Strip into terror hotbeds that would disrupt Israel’s way of life (to use Yasser Arafat’s words).

Politically and diplomatically, he says, Oslo instantaneously transformed the PLO (and, to a lesser extent, Hamas) into an internationally accepted political actor while upholding its commitment to Israel’s destruction, edging toward fully fledged statehood outside the Oslo framework, and steadily undermining Israel’s international standing.

The ending of Israel’s occupation of the Palestinian population of the territories within three-and-a-half years from the onset of the process has gone totally unnoticed (due partly to Palestinian propaganda, partly to Israel’s failure to get this critical point across), with the Jewish state still subject to international opprobrium for the nonexistent “occupation.”

Domestically, Oslo radicalized Israel’s Arab minority, nipping in the bud its decades-long “Israelization” process and putting it on a collision course with Israel’s Jewish community. No less importantly, it made Israeli politics captive to the vicissitudes of Palestinian-Israeli relations, with the PLO and Hamas becoming the effective arbiters of Israel’s political discourse and electoral process.

“On the face of it,” Karsh writes, “Israel’s massive setbacks can be considered Palestinian gains. Yet one’s loss is not necessarily the other’s gain. The Palestinian leadership’s zero-sum approach and predication of Palestinian national identity on hatred of the ‘other,’ rather than on a distinct shared legacy, has resulted in decades of dispersal and statelessness.”

“Even if the PLO were to succeed in gaining international recognition of a fully fledged Palestinian state (with or without a formal peace treaty with Israel) and in preventing Hamas from seizing power, it would still be a failed entity in the worst tradition of Arab dictatorships, in permanent conflict with its Israeli neighbor while brutally repressing its unfortunate subjects.”

Karsh bemoans that fact that “there has been no real reckoning by the Oslo architects and their erstwhile ‘peace camp’ successors, both in Israel and abroad, of the worst blunder in Israel’s history, and no rethinking of its disastrously misconceived assumptions – let alone any public admission of guilt or show of remorse over its horrific costs.”

“Instead, they continue to willfully ignore the Palestinian leadership’s total lack of interest in the two-state solution and serial violation of contractual obligations. They continue to whitewash ongoing Palestinian violence, belittle the extent of Israeli suffering, and blame Jerusalem for the stalled process despite the public endorsement of the two-state solution by five successive Israeli prime ministers: Peres, Barak, Sharon, Olmert, and Netanyahu.”

“Not only has the same terror-tainted Palestinian leadership come to be universally viewed as the prospective government of a future Palestinian state, but its goal of having this state established without negotiating with Israel, or even recognizing its right to exist, seems to be gaining ever wider currency.  This soft racism – asking nothing of the Palestinians as if they are too dim or too primitive to be held accountable for their own words and actions – is an assured recipe for disaster.”

“For so long as not a single Palestinian leader evinces genuine acceptance of the two-state solution or acts in a way signifying an unqualified embrace of the idea, there can be no true or lasting reconciliation with Israel. And so long as the territories continue to be governed by the PLO’s and Hamas’s rule of the jungle, no Palestinian civil society, let alone a viable state, can develop.”

“Just as the creation of free and democratic societies in Germany and Japan after World War II necessitated a comprehensive sociopolitical and educational transformation, so it will only be when Palestinian society undergoes a real ‘spring’ that the century-long conflict between Arabs and Jews can at long last be resolved and a semi-functioning Palestinian state come into being. This requires sweeping the corrupt and oppressive PLO and Hamas rulers from power, eliminating endemic violence from political and social life, and teaching the virtues of coexistence with Israeli neighbors.”

“Sadly, the possibility of a Palestinian spring, which seemed to be in the offing in 1993 when the PLO hovered on the verge of extinction and West Bank and Gaza leadership appeared eager to strike a historic deal within the framework of the Washington peace negotiations, has been destroyed for the foreseeable future by the Oslo ‘peace process’.”

A renowned authority on Middle Eastern history and politics, Prof. Karsh has authored over 100 scholarly articles and sixteen books, and is editor of the Middle East Quarterly and Israel Affairs academic journals.

He taught for 25 years at King’s College London, where he founded and directed the Middle East and Mediterranean Studies Program (currently the Institute of Middle Eastern Studies). In 2013 he joined Bar-Ilan University as professor of political science. In November 2016 he will succeed Prof. Efraim Inbar as director of the Begin-Sadat Center for Strategic Studies.

By Prof. Efraim Karsh  – director of the Begin-Sadat Center for Strategic Studies (BESA)