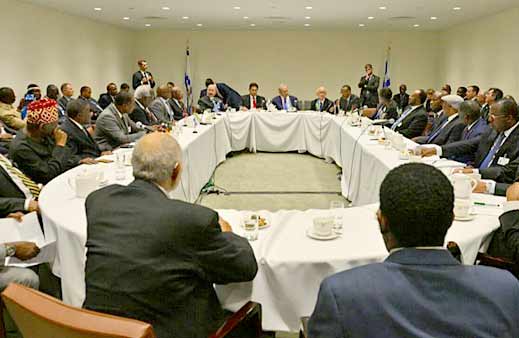 Prime Minister Benjamin Netanyahu met with 15 African leaders and government ministers on the sidelines of the United Nations General Assembly over the weekend.

The presidents of Tonga, Uganda, Benin, Guinea, Ivory Coast, Rwanda and the Central African Republic, as well as the prime ministers of Soto and Swaziland and senior ministers from South Sudan, Cameroon, Eritrea, Kenya, Burundi and Ethiopia were among those in attendance.

“Israeli technology is on its way to help your countries,” Netanyahu told the African leaders. “I believe Israel can be an amazing partner for your countries. Technology changes everything, not just communications, but in medicine, agriculture and education. We want to share our technology with you.”

The leaders thanked Netanyahu and Israel for the cooperation, which they said was very important in that it would benefit African citizens and improve their standard of living.

Netanyahu, his wife Sara, and Israel’s U.N. Ambassador Danny Danon later attended an Israeli Technology and Innovation for Africa event organized by Danon and held at the U.N. headquarters. The three were welcomed with applause.

At the event, representatives from Israeli startups and technological firms presented innovations including a mobile greenhouse, a device that extracts water vapor from the atmosphere, a device that identifies and purifies contaminated water, advanced solar energy that pumps water, and a tool for identifying cancer.

Danon told attendees that “Israel continues to focus on technologies and innovations that led us to our status as the ‘startup nation.’ Our partnership with Africa and the developing world is based not just on the trade of goods, but on the young human capital that is filled with the desire to change the world for the better. Diplomatic and economic relations between Israel, Africa and the developing world are in full swing, and we encourage Israeli companies to continue to invest in Africa and developing countries.”