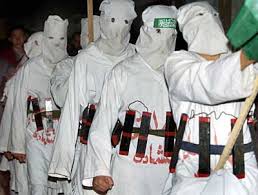 “One only has to open up their proudly written charter to read that they seek bloodshed and terror and even aspire to the genocide of Jewish people worldwide,” says EJC president of Hamas.

One of the largest Jewish umbrella organizations in Europe has condemned the EU’s top court for moving toward the removal of Hamas from the bloc’s terrorism blacklist.

European Jewish Congress (EJC) on Monday berated last week’s recommendation by a top legal advisor for the European Court of Justice in favor of taking Hamas off of the EU’s terror list, and effectively unfreezing the Palestinian movement’s currently sanctioned assets.

“If Hamas is indeed removed from the terror watch list, then this will be the lowest and most worrying point for European Jewry in 70 years,” stated EJC President Dr. Moshe Kantor in reference to the period since the Holocaust.

On Thursday, European Court of Justice advocate-general Eleanor Sharpston argued that the placement of Hamas, along with the Sri Lankan Tamil Tigers, on the EU blacklist had been decided without sufficient, independent evidence.

“Hamas has murdered countless people and ensure millions more live in misery, and their means to kill many more could be given to them on a silver platter because someone in Europe feels there is not enough evidence to define them as a terrorist organization,” Kantor charged in light of Sharpston’s opinion.

“One only has to open up their proudly written charter to read that they seek bloodshed and terror and even aspire to the genocide of Jewish people worldwide,” Kantor added, calling for the issue to be rectified.

In a statement release Monday, he pointed at European bureaucrats as potentially “providing the ammunition both on this continent and elsewhere,” while asserting that Jews continue to serve as target in Europe.

Israel also protested the potential removal of Hamas from the EU terror list, with Foreign Ministry spokesman Emmanuel Nahshon saying: “This is only a (legal) opinion which is not binding on the court and is part of the European judicial process.”

“We are convinced that the European Union will do all that is required in order to keep Hamas, an active terrorist group, on the European terror list.”

While Sharpston’s advice is not binding, judges’ rulings are typically closely aligned with the recommendations of the advocates-general.

The United States has also urged the maintenance of sanctions on Hamas, which controls the Gaza Strip and has fought and attacked Israel for three decades.

The ECJ has said that its justices have begun deliberations on the case and there was no set date for a ruling.

Reuters contributed to this report.


ISIS are plotting wave of car bomb attacks across Europe, intelligence chiefs fear, amid 'exodus' of its fighters in Syria and Iraq Abbas to Arab Leaders: Go to Hell!