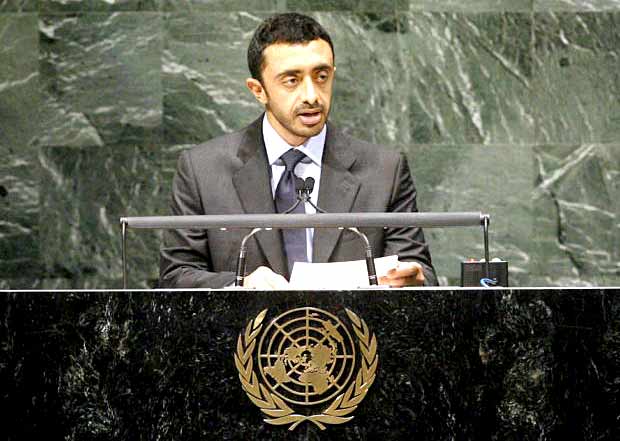 New York- During the general debate of the 71st Session of the United Nations General Assembly (UNGA) in New York, the Foreign Minister of the United Arab Emirates expressed on Saturday concern over Iran’s actions that caused “tension and instability in the region.”

“Regional interference in Arab affairs, mainly perpetrated by Iran, the only country in the world with a constitution that explicitly calls for exporting its revolution, has aggravated conflicts in the region,” Minister Sheikh Abdullah Bin Zayed Al Nahyan said.

He cited what he saw as Iran’s expansionist reginal policies, flagrant violations of the principles of sovereignty and constant interference in the international affairs of its neighboring countries.

Sheikh Abdullah bin Zayed said that the UAE has unwavering faith in the role of the United Nations and its organs, especially the U.N. Security Council, in maintaining international peace and security.

He added that the UAE expects the U.N. to play an effective role in addressing and resolving conflicts, and strengthening states’ fortitude through a framework that ensures respect for the national sovereignty of states and non-interference in their internal affairs.

“Our region, which suffers from serious crises and conflicts, urgently needs a more effective method to confront these issues based on deep rooted solutions backed by the international community.”

The minister called on Iran to return the occupied UAE islands to ensure a stable and friendly environment in the region.

“The crises of our region should not distract us from our core national issue, which is the sovereignty of the UAE over its three islands: Greater Tunb, Lesser Tunb and Abu Musa that are occupied by Iran against the provisions of international law and the Charter of the United Nations.

“My country has called, and continues to call on, our neighbor Iran, to return the occupied islands to their rightful owners either voluntarily or through peaceful means, particularly through international justice or arbitration, in order to maintain friendly relations and good neighborliness in the Arabian Gulf region,” he said.

“We also affirm that my country will never give up its sovereign right over these islands, and this approach emphasizes the UAE’s insistence on the principles of international law,” Sheikh Abdullah stressed.

On Libya, Sheikh Abdullah said that the UAE welcomes the Skhirat Agreement reached by the concerned parties in Libya as well as the formation of the Government of National Accord.

“We hope that it will lead to further commitment to Libyan constitution-building and solidify cooperation between the Presidential Council and the House of Representatives, which both represent legitimacy in Libya. We also look forward to a unified national position that protects Libya’s territorial soil and maintains the unity of its people.”

On the other hand, he said that the UAE sees no possibility of resolving the Syrian crisis through military force.

“To date, this path has only intensified the suffering of the brotherly people of Syria and increased the flow of refugees to other countries,” he said.

“The situation is further complicated by the interference of Iran and its terrorist militias in Syria’s affairs. This has distorted the vision for Syria and derailed it from the existing path; which is based on internationally agreed terms that constitute the only salvation from this horrific tragedy,” he further noted.