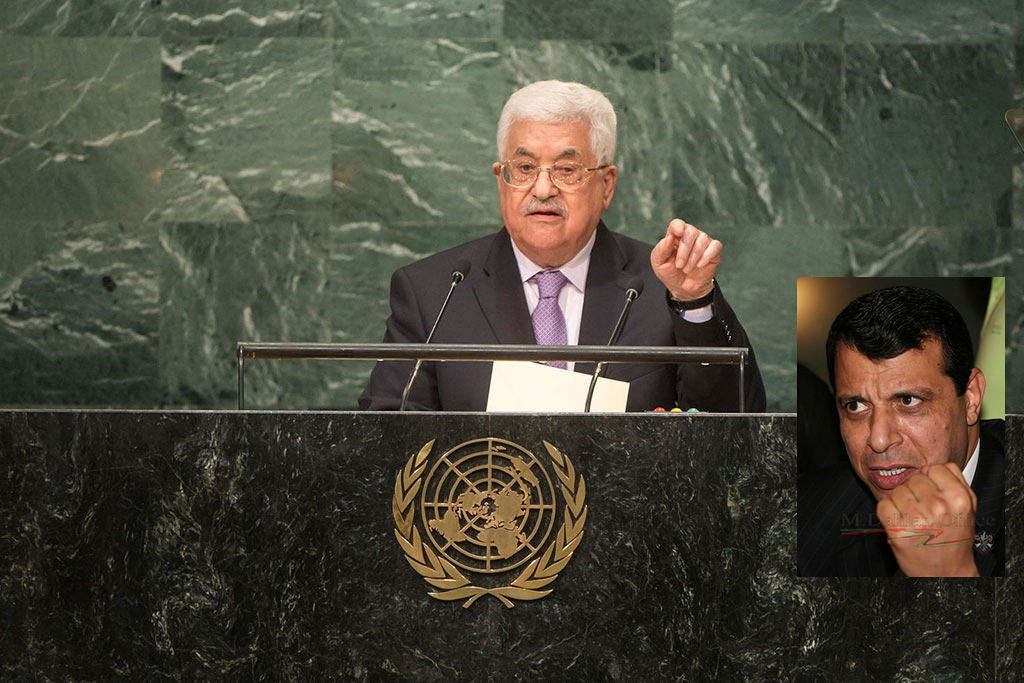 PA President Abbas speaking at the UN 2016. Mohamed Dahlan, thought to be a main contender to succeed him in the inset

In his speech last week before the United Nations General Assembly in New York, Palestinian Authority (PA) President Mahmoud Abbas trotted out his usual charges against Israel, citing “collective punishment,” “house demolitions,” “extrajudicial executions” and “ethnic cleansing.” However, Abbas’s thoughts seem to be elsewhere these days. He is facing a new challenge from unexpected parties, namely several Arab countries that have come together to demand that he reform his ruling Fatah faction and pave the way for the emergence of a new Palestinian leadership.

Yet this was not included in the UN speech. Indeed, why would Abbas share with world leaders that his Arab brothers are pressuring him to introduce major reforms in Fatah and end a decade-long power struggle with Hamas that has resulted in the creation of two separate Palestinian entities in the West Bank and Gaza Strip.

Abbas, his aides admit, is today more worried about the “Arab meddling” in the internal affairs of the Palestinians than he is about “collective punishment” or “settlement activities.” In fact, he is so worried that he recently lashed out at those Arab countries that have launched an initiative to “re-arrange the Palestinian home from within” and bring about changes in the Palestinian political scene.

The Arab countries behind the initiative — Egypt, Saudi Arabia, Jordan and the United Arab Emirates — are being referred to by many Palestinians as the “Arab Quartet.”

In an unprecedented critique of these countries, Abbas recently declared:

Although he did not mention the four Arab countries by name, it was clear that Abbas was referring to the “Arab Quartet” when he was talking about “capitals” and their influence and money. Abbas’s message: “How dare any Arab country tell me what to do, no matter how wealthy and influential it may be.” Abbas sees the demand by these Arab countries for new Palestinian leadership, unity and reforms in Fatah as “unacceptable meddling in the internal affairs of the Palestinians.”

So what exactly is it in the new Arab initiative that has so enraged Abbas, to the point that he is prepared to place at risk his relations with four of the Arab world’s preeminent states?

According to reports in Arab media outlets, the “Arab Quartet” has drafted a plan to “activate the Palestinian portfolio” by ending the dispute between Abbas’s Fatah and Hamas. The plan also calls for ending the schism within Fatah by allowing some of its expelled leaders, includingMohamed Dahlan, to return to the faction. The overall aim of the plan is to unite the West Bank and Gaza Strip under one authority and end the state of political anarchy in the territories controlled by the Palestinian Authority and Hamas. The “Arab Quartet” has even formed a committee to oversee the implementation of any “reconciliation” agreements reached between Fatah and Hamas and Abbas and his adversaries in Fatah. According to the plan, if such an agreement is not reached, the Arab League will intervene to “enforce reconciliation” between the rival Palestinian parties.

Abbas harbors a very particular dislike for Dahlan. Until five years ago, Dahlan was a senior Fatah official who had long been closely associated with Abbas. Once, Abbas and Dahlan, a former security commander in the Gaza Strip, formed an alliance against Yasser Arafat, the former president of the PA. But the honeymoon between Abbas and Dahlan came to an end a few tears ago after the Abbas and his lieutenants in Ramallah began suspecting that Dahlan has ambitions to replace or succeed Abbas. At the request of Abbas, Dahlan was expelled from Fatah and accused of murder, financial corruption and conspiring to overthrow Abbas’s regime. From his exile in the United Arab Emirates, Dahlan has since been waging a campaign against the 81-year-old Abbas, accusing him and his two wealthy sons of running the PA as if it were their private fiefdom.Abbas’s main concern is not a “reconciliation” with Hamas. In fact, he has repeatedly expressed his readiness to form a unity government with Hamas and end the dispute with the Islamist movement. In recent weeks, there has even been renewed talk of Fatah-Hamas talks in Qatar to achieve “unity” and “reconciliation” between the two rival parties. Rather, it is the attempt to coerce Abbas into reconciling with Dahlan that is really getting to the PA president. In the view of a source close to Abbas, he (Abbas) would rather make peace with Hamas than “swallow the cup of poison” of patching things up with Dahlan.

Such is Abbas’s contempt for Dahlan that last week he reportedly instructed the PA authorities to ban Dahlan’s wife, Jalilah, from entering the Gaza Strip. Jalilah runs and funds a number of charities in the Hamas-controlled Gaza Strip. Her activities are seen by Abbas as an attempt to build power bases for her husband and pave the way for his return to the political scene. Abbas’s decision to ban her from entering the Gaza Strip came following reports that she and her husband were planning to organize and fund a collective wedding for dozens of impoverished Palestinian couples. The funding, of course, comes from the United Arab Emirates, whose rulers have been providing the Dahlan couple with shelter and money for several years.

When Abbas says that he “does not want the money” of certain Arab capitals, then, he is referring to the United Arab Emirates and Saudi Arabia. He strongly suspects that these two wealthy countries are investing funds in Dahlan as part of a scheme to replace him and pave the way for the emergence of a new Palestinian leadership. For Abbas, who has refused to name a deputy or promote a potential successor, this is a very serious threat to his autocratic rule and a “conspiracy” by outside parties against him and his Palestinian Authority leadership.

Abbas and Fatah leaders in Ramallah are convinced that the “Arab Quartet” members are actually planning to pave the way for promoting “normalization” between the Arab world and Israel — all at the expense of the Palestinians. They claim that the four Arab countries are using and promoting Dahlan in order to facilitate their mission of rapprochement with Israel. These countries have reached the conclusion that as long as Abbas and the current PA leadership are around, it would be very difficult to initiate any form of “normalization” or peace treaties between Arab countries and Israel. The PA leadership’s position has always been that peace between the Arab countries and Israel should come only after, and not before, the Israeli-Palestinian conflict is resolved.

“The plan of the Arab Quartet prepares for the transitional post-Abbas era and negotiations for peace between Arab countries and Israel. The plan is designed to serve the interests of Arab regimes more than ending divisions among the Palestinians. The goal is to eliminate the Palestinian cause and find an alternative to President Abbas.”

This analysis reflects the views of Abbas and his veteran Palestinian Authority leaders in Ramallah, who continue to be extremely wary of any talk about succession in the PA leadership.

Interestingly, the “Arab Quartet” initiative for now seems to have divided Palestinian officials, with some welcoming it, and others rejecting it.

Criticizing Abbas and the Fatah leadership for coming out against the plan, Hassan Asfour, a senior Fatah official and former PA minister of state, urged Abbas to reconsider his “impractical, irrational and hasty” decision to dismiss the initiative of the four Arab countries. Asfour pointed out that Abbas’s recent criticism of these countries was “harmful” and “unjustified.” Abbas’s close aides have retorted by claiming that Asfour was a political ally of Dahlan and therefore has a clear agenda.

Many Palestinians were surprised to see veteran Palestinian official Ahmed Qurei, a former PA prime minister and one of the architects of the Oslo Accord, come out in favor of the “Arab Quartet” plan, which basically envisions ousting Abbas from power. Abbas’s close advisors claim that Qurei has joined Dahlan in his effort to bring about regime change in Ramallah.

Dahlan, for his part, has launched his own initiative by calling for an “expanded” gathering of Palestinian factions in Cairo, to discuss ways of bringing about real change in the Palestinian political arena. Thus, Dahlan has moved from behind-the-scenes activities to topple Abbas to public moves. And in this he enjoys the political and financial backing of at least four important Arab countries that would also like to see an end to the Abbas era. This is the first time that a senior Palestinian official has openly challenged the PA leadership with the support of Arab countries. It is predicted that at least 600 people will attend the Dahlan-sponsored conference in the Egyptian capital. The PA leadership is now threatening to retaliate against anyone who attends the conference by cutting off their salaries. This will only deepen the crisis in Abbas’s Fatah and yield yet more infighting.

Abbas undoubtedly had these thoughts in mind when he addressed the UN General Assembly — the new Arab “conspiracy” to replace him with Dahlan, or someone else. This, and not Israeli policy, is Abbas’s true nightmare. After all, he knows that without Israel’s presence in the West Bank, his regime would have long fallen into the hands of Hamas or even his political rivals in Fatah.

The “Arab Quartet” plan shows that some Arab countries are indeed fed up with Abbas’s failure to lead his people towards a better life. These states, which have long been politically and financially supportive of the Palestinians, have had enough of Abbas’s efforts to secure unending power — at the direct cost of the well-being of his people. It will not take long before we see whether these Arab countries, now mocked by Abbas, will succeed in ridding the Palestinians of leaders who lead them toward nothing but ruin.


'Axing Hamas from EU terror list would be lowest point for European Jews since Holocaust' Hamas and Black Lives Matter: A marriage made in hell