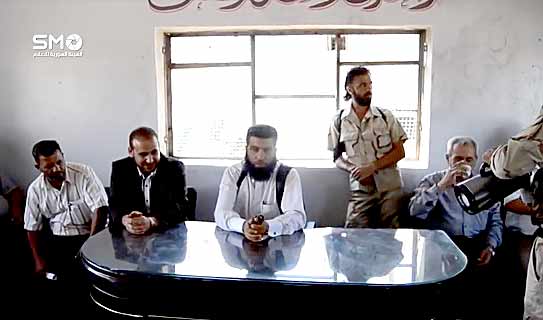 A shocking new video purportedly shows an ISIS terrorist blowing himself up during a meeting of the Free Syrian Army rebel group, Israel’s Channel 2 reported on Sunday.

In the clip, the suicide-bomber can be heard shouting “Allahu Akbar,” before detonating his explosive belt.

According to the report, the event is alleged to have taken place in July, though the video was only uploaded to YouTube on Saturday, after someone managed to get hold of the tape and release it.

It is also assumed that the event took place in the city of Daraa in southern Syria, where heavy battles are being fought, and that ISIS succeeded in infiltrating the Free Syrian Army headquarters.

Channel 2 said that the meeting in question was between Free Syrian Army commanders and the al-Nusra Front. In the video, members of both groups can be seen delivering speeches which are then interrupted abruptly by a major explosion. What follows is the sight of the smoke-filled room and sounds of screams, as well as gunfire, ostensibly retaliatory in nature.

According to Channel 2, there is not much information available on the suicide-bomber, but his photo was published on various news sites in Syria and his name is reportedly Abu Hamza.

The event, in which at least seven people were killed and many more wounded, is part of the ongoing civil war in Syria.

The Free Syrian Army was founded in the summer of 2011 by officers of Bashar al-Assad’s armed forces, who turned against the Syrian president. After 2012, jihadist groups dominated the anti-Assad opposition, and today, the Free Syrian Army is considered a disparate bunch of warlords, rather than a cohesive organization.

Watch the video of the suicide attack below: