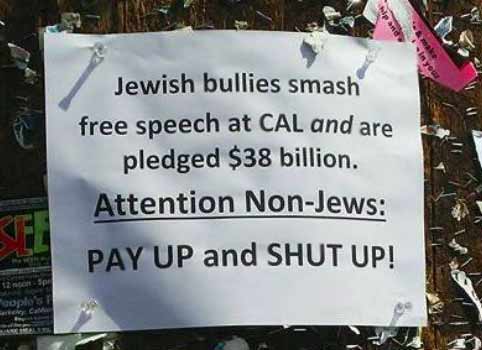 Antisemitic posters have been appearing around the University of California, Berkeley campus ever since a course exploring how Israel might be destroyed was first suspended and then reinstated early last week, The Algemeiner has learned.

The syllabus, titled “Palestine: A Settler Colonial Analysis,” was decried by a campus watchdog group as “a classic example of antisemitic anti-Zionism.”

One of the offending posters referred to the coalition of 43 Jewish, civil rights and educational organizations that had written an open letter expressing concern about the course and disappointment in UC Berkeley’s vetting process, calling the groups “advocates for a foreign state” who “seek to control our freedom of speech and academic expression.”

It also claimed that the Israeli government was directly involved in the initial suspension of the course.

Another poster derided the large US military-aid deal recently signed with Israel, snidely telling “non-Jews” that they had better “pay up and shut up” in the face of “Jewish bullies.”

In an email to the university community on Thursday, the UC Berkeley administration responded to the anti-Jewish rhetoric in the posters, saying, “The language used violates our Principles of Community, as well as the Regents’ Principles Against Intolerance,” and assuring that the school had “instructed that the posters be removed.”

“We will continue to do everything in our power to ensure we have a campus climate that is safe, welcoming and respectful for all,” the statement read.

As reported by The Algemeiner, UC Berkeley said it rescinded the suspension of the course last week after its syllabus was purportedly changed. However, a close examination of the new syllabus by The Algemeiner revealed only minor changes, and found that the same anti-Zionist literature will be studied as previously listed.

The language of the course description was also modified to remove the admission that the course would be “exploring the possibility of decolonization,” as originally stated. It now says that the program will involve researching “a range of political alternatives” to “achieve justice for all.”

Paul Hadweh, the course facilitator, admitted to anti-Israel website Electronic Intifada that revisions to the syllabus were mere “cosmetic changes” and no adjustments had been made to the course material.

“The changes are just clarifications to the course description, its objectives and the final project,” he said.

In a recent interview with The Algemeiner, the international campus coordinator of the Committee for Accuracy in Middle East Reporting in America (CAMERA) said, “By condoning a class that is so explicit in undermining the Jews’ historical ties to the land of Israel and Israel’s right to continue to exist, the school is perpetuating an antisemitic atmosphere on campus.”

According to a 2016 report by campus watchdog group the AMCHA Initiative, opposition to Israel’s right to exist saw a dramatic rise across college campuses in the first half of 2016, with “an almost three-fold increase” compared to the same time period in 2015.

Another finding described “the incidence of language and imagery opposing Israel’s right to exist” as being “highly correlated with the targeting of Jewish students” on campus.