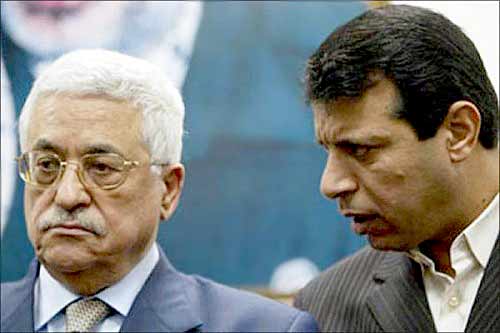 A top Egyptian intelligence official is heard mocking Palestinian Authority President Mahmoud Abbas in a newly leaked phone call with a chief rival of the PA leader, characterizing him as old and stupid and saying the Fatah party is “screwed” under his leadership.

According to the Middle East Eye, the comments were made by Major General Wael el-Safty, an officer in Egypt’s General Intelligence Directorate in charge of Palestinian affairs, during a conversation with Fatah’s Mohammad Dahlan.

In excerpts of the call which were broadcast on Egyptian Mekameleen TV, Safty reportedly says Abbas’s “concentration isn’t at full capacity” and he “has nothing to offer.”

Safty goes on to compare Abbas to “a camel,” saying he routinely regurgitates old ideas. He also speaks of his advanced age (the PA leader is 81), saying “The track is running out, if you excuse the phrase.”

“Fatah is completely screwed,” he says. “The (PLO) is even worse…It’s stupidity.”

Only Safty’s side of the conversation is heard in the leaks.

Though Middle East Eye notes that the broadcaster, Mekameleen, is not neutral and has in the past clearly supported the Islamist Muslim Brotherhood in Egypt, it says previous tapes leaked by the network have been authenticated by British experts in forensic speech science.

Dahlan, a former strongman in the Gaza Strip before Hamas’s violent takeover in 2007, was once regarded as one of Fatah’s most prominent figures. Long at odds with Abbas, he was expelled from Fatah in 2011 following allegations of corruption and murder and now lives in the United Arab Emirates.

Sometimes touted as a possible successor to Abbas, Dahlan has routinely criticized the leader’s policies and has funded projects in the West Bank and Gaza in a bid to strengthen his own status, moves seen by Abbas’s supporters as a continuing effort to one-up the PA president.

In recent months Abbas and Dahlan have been attempting to mend their ties ahead of local elections in the West Bank and Gaza, in a bid to encourage unity in Fatah and prevent a victory for Hamas.

Avi Issacharoff contributed to this report.