Chuck Schumer: Anti-Semitism in too many European homes 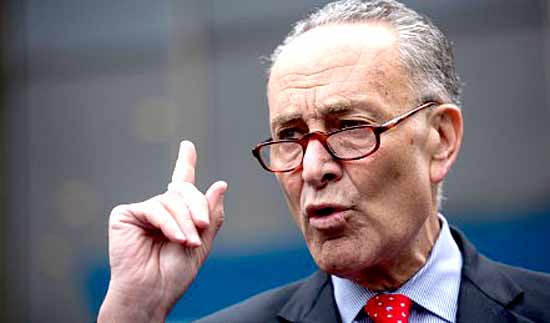 “Those who call for boycotts of Israel… are practicing whether they know it or not – a modern form of anti-Semitism.”

Schumer compared the BDS movement to the radical Students for a Democratic Society, which in the 1960s launched mass demonstrations against the US government on campuses across the country.

“They ultimately don’t believe there should be a Jewish state in the Middle East and are guilty of the same anti-Semitism. We need to make that argument loudly and strongly and go against the BDS movement and call it for what it is, an anti-Semitic and not just anti-Israel movement.”

“I applaud the governors of New York and California for” passing anti-BDS legislation, Schumer added.

While anti-Semitism is enjoying a renaissance on American college campuses, Schumer said, the problem is far worse in Europe.

“Unfortunately anti-Semitism seems to be in far too many European homes.”

Schumer noted that the hatred of Israel and correlating anti-Semitism is on the rise on both the fringe right and far-left in Europe, citing the UK Labour Party under Jeremy Corbyn as an example.

“Europe has shown how anti-Israel and anti-Semitic the BDS movement really is. Far-right parties are experiencing a rebirth, and far-left parties… like the Labour party under Corbyn are increasingly anti-Israel.

“Terrorism and violence against Jews is on the rise, from vandalizing synagogues to thehorrible attack on a Jewish grocery in Paris. It is no wonder that last year in France, home to the largest Jewish population in Europe, set a record for the migration of Jews to Israel.

“The Jewish people can never put the fate of Israel in the hands of Europe in any way.”