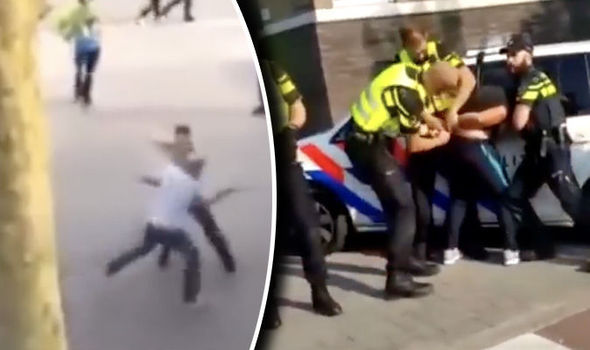 The terrifying attacks have been filmed by the twisted gang of migrants around the city of Zaandam.

For months now, migrant youths have uploaded videos of themselves beating up random citizens and even intimidating police officers.

In one shocking clip last weekend, the gang can be seen relentlessly chasing after and attacking local Dutch civilians.

The chaotic fighting, in the square outside a supermarket, sees one of the attackers wielding what appears to be a crowbar.

Another chilling video captured the gang laughing while they beat up a passerby after knocking him off his bicycle.

Two weeks ago, police were criticised for arriving nearly an hour after a news crew was attacked and pelted with eggs by the terrifying mob.

In previous videos, the gang – nicknamed the ‘Erdogan warriors’ by local press – have shown off their weapons while boasting that they will “kill” people who anger them.

The city has been in turmoil for months – but the group of violent youths has finally been punished.

Crowds of locals met earlier this week at the town hall to complain about the officials’ reaction to the unrest.

Thi meeting was set up after Dutch prime minister Mark Rutte described them as “scum” and a local councilor made a formal police complaint after being threatened.

Cinderella Meijer, who works at a local youth centre, said the migrants had been banned after damaging the facility and stealing from it.

She said: “This has already been playing out for ten years. They get everything from the city council, everything is done. But each time they destroy and steal.

“They even threatened us with a firearm when we tried to stop them from smoking inside.”

Last night, dozens of police raided the neighborhood where the migrants live and arrested 12 people.

This comes as the police announced extra surveillance in the neighborhood as well as a temporary ban on public meetings of youth.

The ringleader of the mob, 19-year-old Ismail Ilgun, who posted the videos of the attacks onto YouTube, was among those arrested.

He has since apologised for his “stupid” behaviour.

He said: “I’ve put things online which I should not have done. Things should never have gone this far

“This is not what the lads and I wanted. We are young and inexperienced and don’t know anything about television and the media.”