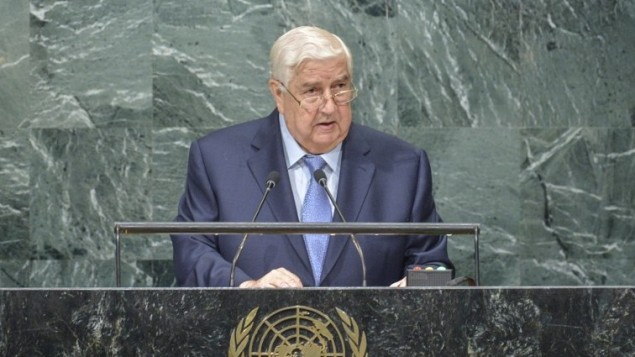 Speaking before the United Nations General Assembly, Muallem said the Syrian state was dealing not only with “mercenary terrorists on its territory” in its five-year civil war, but also “has long confronted a different kind of terrorism; the terrorism of Israel that has occupied a precious part of our land in the Syrian Golan since 4 June 1967.”

Israel’s “oppressive and aggressive practices,” he said, “are no longer confined to the Occupied Golan, and are currently affecting the security and life of Syrians in the southern part of the country.”

Israel captured the Golan Heights in the 1967 Six Day War, and annexed the territory in 1981.

Israeli attacks in Syria, which the IDF routinely carries out in response to mortar or rocket fire landing in the Israeli-held Golan Heights, serve to “assist in every way the terrorist organizations operating in that area,” Muallem charged.

“Syria reaffirms that Israel’s aggressive policies do not only threaten Syria but the whole region, especially given Israel’s nuclear arsenal,” he told the assembly.

Muallem also claimed the US-led coalition airstrike on Syrian soldiers a week ago was intentional, rejecting US claims that it was a mistake.

“The Syrian government holds the United States fully responsible for this aggression, because facts show that it was an intentional attack, and not an error, even if the United States claims otherwise,” Muallem said.

Dozens of Syrian soldiers were killed in the bombing on September 17 of the Syrian air base near the eastern city of Deir Ezzor, which is controlled by Islamic State (IS) jihadists.

The United States has expressed regret for the loss of lives, saying the coalition believed it was hitting an IS target and has promised to investigate the incident.

Muallem said the “cowardly aggression clearly proves that the United States and its allies are complicit with ISIL and other terrorist armed organizations.”

The coalition strike which involved US, British and Australian warplanes prompted the Syrian army to end a week-long truce that had raised hopes that diplomatic efforts to end the five-year war were bearing fruit.

More than 300,000 people have died in the conflict in Syria and millions have been driven from their homes.

Muallem hit out at Qatar and Saudi Arabia, accusing them of “sending into Syria thousands of mercenaries, equipped with the most sophisticated weapons” to fight President Bashar Assad’s government.

He said Turkey was allowing “tens of thousands of terrorists from all around the world” to cross its border into Syria, providing them with logistical support and training camps “under the supervision of Turkish and western intelligence.”

“We, in Syria, are combating terrorism on behalf of the whole world,” he said.

The Syrian foreign minister, who is also deputy prime minister, took the podium at the United Nations after a week of intense diplomacy failed to revive the ceasefire.

Airstrikes pounded the battleground city of Aleppo on Saturday, killing at least 32 civilians, according to the Syrian Observatory for Human Rights, which expected the death toll to rise as rescuers recovered bodies trapped under rubble.

The approximately 250,000 people in rebel-held east Aleppo have been under near-continuous attack since the truce broke down on Monday.


The Middle East Will Remain a Source of Terrorism Will Mahmoud Abbas Reject Israeli Protection? By Steven J. Rosen