The Illusion of “Peace in Exchange for Territories” 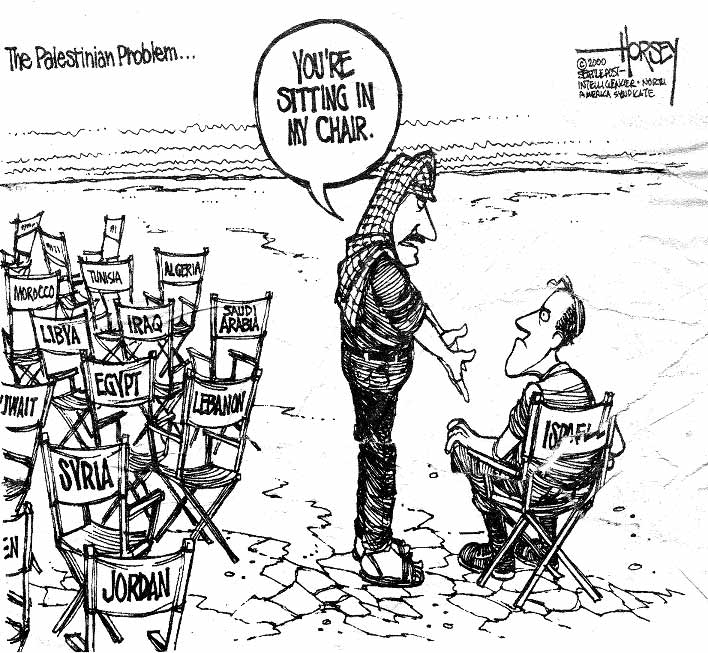 EXECUTIVE SUMMARY: For years, especially since the 1991 Madrid Peace Conference, Arab leaders have repeated the mantra that peace with Israel hinges upon a withdrawal to the pre-1967 border. Similar rhetoric followed with the Arab Summit’s March 2002 decision to endorse the “Saudi peace initiative,” suggesting that the Arab world’s problem with Israel stems from “occupation” of the West Bank, Gaza and Jerusalem. This paper demonstrates the error of this assertion. The Arab demand for a return of all Palestinian refugees to pre-1967 Israel remains at the core of the Israeli-Palestinian conflict, and this demand disguises Arab intentions to destroy Israel.

During the rule of Fatah and since the rise of Hamas, the Palestinian Authority’s (PA) official position states it will not renounce the “right of return” to greater Israel. It still remains unclear whether the Palestinians will be satisfied with a homeland in the West Bank and Gaza Strip following an Israeli withdrawal to the Green Line. Palestinian insistence on the refugees’ right of return, ending the Jewish majority in the State of Israel, indicates hostile intent.

The preservation of the refugee ethos through the media and the education system is intended to prevent concession on the right of return. All Palestinian symbols and illustrations depict Palestine as the land from the Mediterranean Sea to the Jordan River. These illustrations do not show the Palestinian state as Gaza and the West Bank.

Apart from Sari Nusseibeh, whose popularity among the Palestinian public ranks lower than that of the ultra-dovish Uri Avnery within Israel, no Palestinian politician or leader has unequivocally supported relinquishing the right of return. Arafat avoided signing such a statement at Camp David in July 2000.

The Syrian regime’s official message states that the Golan Heights belong to Syria and Israel must withdraw to the 1967 borders regardless of a peace agreement. The most Israel can expect to receive in return for this withdrawal is quiet from Lebanon. According to all Syrian statements, peace hinges on Israel granting “the legitimate rights of the Palestinian people”, based on “returning the rights of all those who are entitled”. These statements, repeated in Syrian rhetoric, have a single meaning in the political lexicon: the return of the 1948 refugees (including their grandchildren and great-grandchildren born in Syria) to their original homes in Israel.

Today, there are roughly 350,000 people with refugee status in Syria. The majority of these refugees were born in the country and are descendants of the original Palestinians who left in 1948. Additional proof of Syrian demand that these refugees return to Israel was exemplified during the Madrid Conference. Hafez al-Assad halted the activities of the Multilateral Committee for Refugees when he realized the discrepancy between Israel and Syria’s view of the committee. Israel understood the committee’s role as finding a solution to the refugee problem in Arab states, whereas Syria believed the refugees would be repatriated into Israel.

Bashar al-Assad continued his father’s rhetoric, stressing the importance of the Palestinian right of return in a speech as recent as August 2006. In Syria’s view, those who did not insist on Israel’s duty to accept the refugees  such as President Sadat of Egypt and King Hussein of Jordan  were traitors.

Since 1948, each successive Lebanese government has advocated the return of all Palestinian refugees residing in the country and has denied them Lebanese citizenship. According to UNWRA, this number now exceeds 300,000. Hezbollah leader Sheikh Hassan Nasrallah supported this position in a recent speech during the 2006 Israel-Hezbollah war when he accused Israel of trying to force Lebanon to grant the refugees citizenship. Nasrallah and Lebanese politicians echo the words of their Arab brethren; peace with Israel is conditional on the right of return of all 1948 Palestinian refugees and their descendants.

Political factions in Lebanon oppose the resettlement of the 1948 refugees. In order to prevent their relocation, Lebanese law prohibits the refugees from working in 73 occupations and forbids them from purchasing real estate, opening businesses and receiving organized medical care. It is important to note that the Maronite Christians, Israel’s “natural allies” in Lebanon, are the strongest opponents of granting the Palestinians citizenship, because the Maronites face similar demographic problems.

Additionally, Lebanon’s political system is not autonomous and its Israeli foreign policy must agree with the Syrian regime. It is unclear whether Lebanon will free itself from Syrian dictation in the future. Therefore, the matter of refugees in Syria and Lebanon  numbering approximately 700,000 individuals  should be viewed as a single issue.

Jordan signed a peace agreement without reacquiring the land it lost to Israel in 1967. King Hussein severed the connection between the West Bank and Jordan in 1988, ostensibly to make room for the Palestinian Liberation Organization (PLO), who was then leading the first Intifada. In return, he received “special standing” or status as “protector” of the Islamic holy sites on the Temple Mount; a Jordanian attempt to gain Islamic legitimacy for the Hashemite royal family.

Palestinian citizens of Jordan oppose the peace agreement signed by Hussein because it lacks the right of return clause. Yearly demonstrations held in the refugee camps exhibit the Palestinian hope that they will soon return to their houses in historic Palestine. This belief negatively impacts Israeli-Jordanian relations.

Complete evacuation of Sinai brought formal peace with the Egyptian government, but did not eliminate Egyptian hatred of Israel. Over the years more than fifty agreements have been signed between the two countries in a large number of fields  tourism, agriculture, education, economy, industry and cultural exchange  but only a few were implemented due to Egyptian refusal. Many Egyptians view Israel as a Jewish, modern, liberal democracy; a foreign concept to the Islamic, traditional, tribal reality of the Middle East. Egypt is usually the most vociferous opponent of Israel and numerous Egyptian initiatives aim to undermine Israel’s international status. In spite of the fact that Israel is a peace-seeking nation, Egypt constantly tries to depict Israel as a danger to the region by drawing attention to Israel’s alleged nuclear program.

Egypt invests effort into convincing other Arab states against having relations with Israel, and its overall attitude toward Israel was and still is reflected by Egyptian apathy vis-?-vis the smuggling of weapons, ammunition, explosives and terrorists to the Gaza strip from Egyptian soil. The Egyptian media  free as well as state controlled  is flooded with anti-Israeli and anti-Jewish propaganda, reminiscent of propaganda by the Nazi regime. One of the most popular songs in Egypt is sung by the popular Sha’ban ‘Abd al-Rahim, entitled, “I hate Israel”.

Egyptian hatred towards Israel continues, despite the fact that Egypt has no territorial dispute with Israel, and cannot be attributed to occupation. Negative attitudes are perpetuated by the Islamic belief that Jews do not have a right to an independent state, especially on any part of Palestinian land. In addition, the prosperity and success of the Jewish state, in comparison to Egypt, adds fuel to Egyptian jealousy.

According to this view of the Middle East, most Arabs  regimes as well as societies  prefer that the 1948 refugees remain in camps in order to justify hatred of Israel. They ignore the fact that Palestinian suffering is a direct function of the Arab countries’ denial of Palestinian human rights.

Relations between Israel and its Palestinian and Arab neighbors are not dominated by the issue of disputed territory, but by the issue of the alleged right of return. According to Arab ethos, the 68-year-old plight of these refugees is to return to Israel proper, despite the fact that many are not even of Palestinian origin. Western negotiators and Israelis tend to brush the refugee problem under the table. To them, the refugees are faceless, landless and nameless, but for Arab societies surrounding Israel, the refugee issue is acute and personal.

Those who claim that the refugees “understand” that they will no longer be able to return to Israel cannot explain the continued existence of the refugee camps, and the refugees’ prolonged residence there, under disgraceful conditions and harsh neglect. Israeli spokespeople who believe that the return of territory will bring peace must analyze and understand what is being said in the Arab media and on the Arab streets.

According to Arab public discourse, undermining the legal and moral validity of the Palestinian right of return is breaking precedent and betraying the Palestinian people and the Arab nation. In Arab politics, maintaining the hope of return enforces its validity. Closure of the refugee camps is perceived as an action against the Palestinian people and their rights. Few Arabs are prepared to accept the Israeli position regarding refugees and there is little variance of opinion between “secular” nationalist factions and religious Islamic groups. The handful of intellectuals who recognize the Israeli position usually reside in Western countries, and their influence in the Arab world is negligible.

If a complete Israeli withdrawal from the Golan and Judea and Samaria (including Jerusalem) were to occur, Israelis would be bitterly disappointed to discover that the main problem between Israel and its neighbors  the problem of the State of Israel’s very existence  has not been solved, and will continue to constitute the focus of the conflict. If Israel insists on preserving the Jewish character of the state, peace might be unattainable. Instead of looking inward and postulating a benign Middle East, it behooves Israel to understand its neighbors, especially the Palestinian refugees, and the states and societies hosting them.

Lt. Col. (res.) Dr. Mordechai Kedar is a lecturer of Arabic studies and Middle East studies at Bar-Ilan University and a research associate at the Begin-Sadat Center for Strategic Studies.